Originally, ADB transfers through USB and TCP, which are both “stream”s that doesn’t have a packet boundary. So ADB defined its own packet format.

As I talked in part 1, ADB has three parts:

Actually there are two protocols: One between client and server, and another between server and daemon.

However, in WebADB there is no split between client and server, it exposes APIs that send requests to daemon. In another word, I’m implementing the protocol used between server and daemon.

So from now on, I will call WebADB as client, and daemon is still daemon.

Native ADB implementation transports data over USB or TCP, and the code was mixed together. I have seen some commands relies on specific transportation and caused some bugs.

My principle of managing project is that:

For transportation, I can easily came with multiple implementations:

So I defined a AdbBackend interface, containing a pair of read and write methods.

The constructor of Adb class takes an AdbBackend instance and use it to transfer data. I also refactored existing code to become the first AdbBackend.

All fields are little-endian, strings are in UTF-8 encoding, some strings require a null-character while some others not.

Maybe because ADB only transfers over a USB cable or a wireless router which is reliable enough, the possibility of bit flip is very low. And calculating checksum for large payloads is costing. So it was removed in second version.

It’s always taking the command field and xor it with 0xFFFFFFFF. Maybe ADB use it to detect packet boundaries. I’m not really sure.

Since checksum and magic are not affected by packet types, and payloadLength is always the length of payload field, I will omit them from now on.

Client will send the first packet to the daemon. It has following values:

Client and daemon will negotiate which version (and max payload size) to be used.

Device banner is defined as following:

A CNXN request’s device banner should look like this:

Note that the last ; and \0 are required for Android <9 to work.

If daemon requires authentication, it will send back an Auth request.

Client signs the received token with its RSA private key, and send a Token Auth response.

If daemon can verify the signature with any saved public key, authentication succeed.

After the client has tried all its RSA private keys but no one succeed, the client can send its RSA public key to daemon

The payload is 701 bytes long because:

I really don’t understand what’s the point of base 64 encoding and extra null character, clearly the connection can transfer binary data directly right?

For how to generate the ADB public key you can refer to the source code directly. It’s some math that I don’t understand either.

Anyway, now this should popup on the device screen: 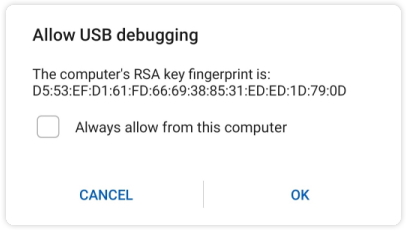 If the user tap OK, daemon will accept the connection. If the user also ticked the “Always allow this computer” checkbox, daemon will save this public key to its storage. So next time the same client connects, it can use token authentication.

There is no way for the client to know if the user tapped Cancel or they just ignored it.

Clearly there are some states: each Auth request must be responded with a different key.

A generator function can take arguments, return a value, then pause its execution. When required, it will resume its execution and return another value. All local variables will be preserved between executions. And more important, generator functions in JavaScript can receive a value when resuming, which is not possible with other language, for example C#.

I also added key enumeration and generation to AdbBackend, since every runtime may have its own way of generating and storing.

At last a authentication method can be implemented like this

It receives the first packet from argument, later it overwrite the packet variable name with newly received packets from yield.

I have to admit that this usage is very uncommon, and a little bit hard to understand without explanation.

Another huge downside is that invoking such a generator, especially a list of such generators (I need to support multiple authentication methods), is much much uglier. The only way to return a value to yield is manually invoking the next method. In this case error handling and iterator state management also has to be done manually, normally all being taken care by for...of.

However, because authenticators need to iterate through both key list and request packet list, there is really no elegant way to iterate through multiple lists at same time. You will end with doing all those dirty things manually anyway. My implementation won’t duplicate such logic in each authenticator so I think it’s still a better option.

features is used for feature detection. Some newer command or variants are not supported by older devices, ADB can test it with this field.

The core of ADB is a stream multiplexer. All ADB commands are based on streams. This means they don’t directly send ADB packets. Next time I will explain this in detail.

The next post should contains less “how does ADB work” thing and more implementation decisions and details. I believe so.